SciPy has had a tool, called dev.py, for a while now. It is essentially a smarter, more Pythonic, easier to use Makefile that captures the typical developer commands. I’ve written a simplified but configurable version of that tool that can be customized for ecosystem projects (although, this was designed specifically for those who have to build binaries with Meson, since the Meson workflow is not that well known yet—I’m thinking scikit-image, pandas, astropy, etc.)

This is an experiment: we’re not sure how useful it will be vs simply documenting commands that need to be run. But, I’d like you to please try it out and see how it can be improved.

You can customize the commands available—they’re just Python functions that can receive parsed arguments, and that can also access the pyproject.toml configuration.

What do you think about things like Hatchling? It seems like in the end it would provide a similar feature set no? You could add a build plugin that would call Meson.

Hatchling looks like it does a whole bunch of things other than just provide a cli. I’d prefer to stick with something really simple.

It also looks like this project is just out of its shell. Here is their docs on plugins. I could figure out how to write a custom plugin that can handle its own argument parsing, but perhaps it’s possible?

Hi @stefanv and @jarrodmillman looks like you all have already put a lot of work into this.

Is the goal to have something like a pure-Python build system for projects using Meson/ninja?
Or is it a more general pure-Python makefile-like thing

Just a note that it might be worth looking at nox 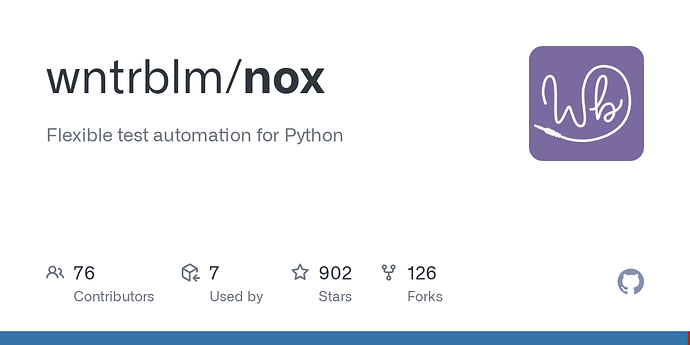 Flexible test automation for Python. Contribute to wntrblm/nox development by creating an account on GitHub.

This is what scikit-hep uses, specifically recommending it as an alternative to Makefile because it is platform independent and friendlier to newbie developers:

The Scikit-HEP project is a community-driven and community-oriented project with the aim of providing Particle Physics at large with an ecosystem for data analysis in Python. The project started in Autumn 2016 and is under active development.

as well as many of the core Python projects like pip

This file has been truncated. show original

This file has been truncated. show original

Thanks @nicholdav. That looks similar to what we’re building here. I think even in this early phase, though, the dev.py interface is quite a bit easier to use. --help does what you expect it to, also for subcommands. With tox, you have sessions, but I cannot figure out how to ask for help on session arguments. E.g., tox -s test --help just prints out the default help. The goal here is to have something that is easy to use and easy to extend with arbitrary commands that each can have their own flags, and can also access project metadata.

Is the goal to have something like a pure-Python build system for projects using Meson/ninja?
Or is it a more general pure-Python makefile-like thing

This is not a build system, just an interface that developers can use to execute often-needed “magic incantations”.

The goal here is to have something that is easy to use and easy to extend with arbitrary commands that each can have their own flags, and can also access project metadata.

I see, thank you @stefanv – you want a cli then.

Yes, def the case that nox will not give you a cli with subcommands, although you can add command-line args to any session

Def didn’t mean to to rain on anyone’s parade. Will star and keep an eye for if/when I need to build anything beyond pure Python

Def didn’t mean to to rain on anyone’s parade.

You absolutely didn’t! I appreciate that you are helping me do my due diligence.

Thanks a lot for working on this @stefanv!

For additional context: NumPy and SciPy (and probably several other projects) have used a runtests.py for many years. The dev.py interface in SciPy is basically a much-enhanced version of that. It doesn’t have to be restricted to Meson indeed.

I have personally found it super useful to have (1). And wrote an extensive rationale for that in RFC: unify all developer CLI tools · Issue #15489 · scipy/scipy · GitHub (the RFC for implementing dev.py in SciPy).

Having a unified tool to have a dev.py interface for many projects is a very nice step forwards.